15 foot indian python was seen swallowing a live goat by the villagers in the Jalpaiguri district of West Bangal, India. Residents of the community came out with their cameras snapping and covering the incident when the goat began to squeal.

The incident took place at the edge of the Baikanthapur forest on July 1 at about 2pm. The villagers contacted a forest official who came immediately to the scene and carried the python away to the forest.

The 15-foot snake is known to be non-venomous but very quick to strike and disable its prey. It is also known to swallow life chickens and rats that come across its way. Indian pythons of this kind can survive a month after having a meal as big as this.

Viral Alert
I love searching for the most viral, funny and interesting videos and events to bring awareness to people and entertain them. Visit this page daily to get the most up-to-date viral videos on the net. Follow me and I'll follow you.
http://viral-alert.com

Tim Friede survives after bitten by the world’s deadliest snake 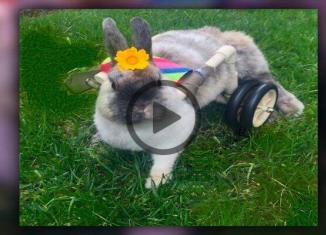 The Rabbit on Wheels Finds Her True Love